Programming - what I've been up to lately

Few things gets me going like programming. After a rush of coding in the beginning of the year, I found myself missing the creative intellectual challange that programming poses. Then I found a missing application and my geek life got new zest.

With three telescopes and a bunch of eyepieces, there are lots of calculations that I want done. An eyepiece is that optical piece you put in at the end of a telescope that determines the magnification and field of view you get.

Having already made a program for the HP-41 that calculates all this, I thought it would be cool to recreate this type of program as a terminal/console application (for Linux, MacOS, Windows).

Three evenings later and “Telescope” was up on Github and Rubygems.org. 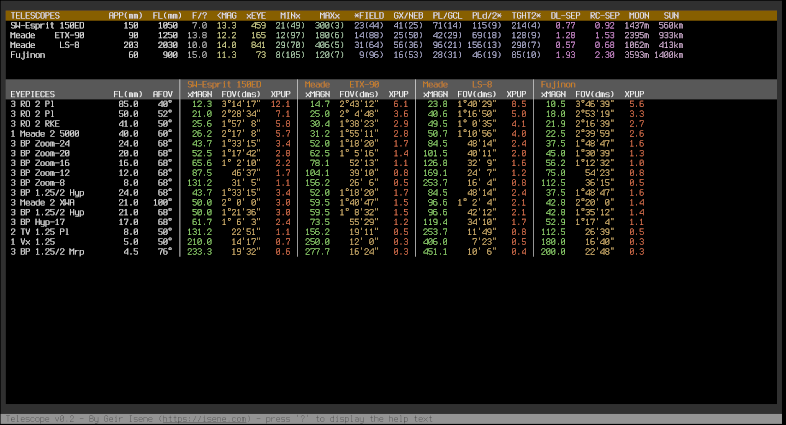 I also did a bunch of improvements to the RTFM filemanager.

To make for easier installations, I started making Ruby “gems” out of my applications. This makes it silly easy to install my set of (useful) solutions, simply do this in a terminal:

In less than 2 months, there’s now more than 8500 downloads of my RubyGems. All free with no restrictive licenses. I like that people find them useful.